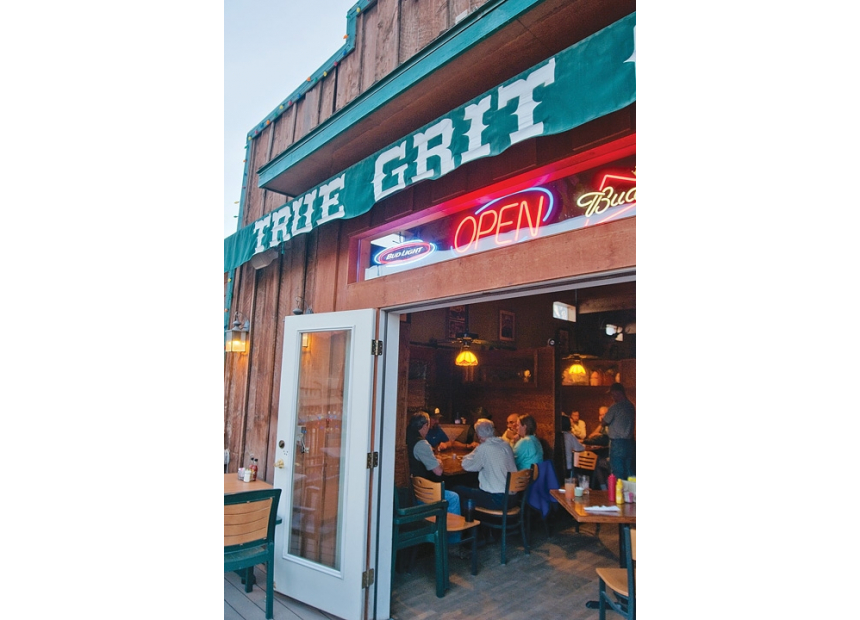 A ragtime piano player sets the old-time mood as the Tuttles serve dishes like chicken fried steak and cranberry salad at True Grit Cafe in Ridgway.

IN THE ORIGINAL True Grit, a paddy wagon backs up to a vacant lot in front of a sign that reads “Chambers Groceries.” John Wayne, playing U.S. Marshal Rooster Cogburn, pulls one ruffian out and boots him in the back, knocking him right through the space now occupied by the True Grit Café in Ridgway.

True Grit Café is both a shrine to John Wayne and to hearty Colorado classics like hand-cut ribeyes, homemade meatloaf and potatoes smashed with the skin on. On the evening we visited, a big, handsome cowboy sat right under the Chambers Groceries sign, preserved on the southern wall of the cafe bar. As a fan of John Wayne took a photo of the sign and the cowboy, the young female bartender teased the cowboy to “look pretty.” He flexed and she flirted until his pretty girlfriend arrived.

The cowboy looked like he was placed there for atmosphere, but he was the real deal. Located on the edge of the jagged San Juan Mountains, Ridgway is moving upscale, but a true cowboy culture still exists. True Grit Cafe feels like the perfect eating place that mixes the old and new. The street out front is still dirt, paralleling a wooden boardwalk, much like in True Grit, the film.

Inside, a ragtime piano player bangs out tunes five nights a week in the summer beneath an array of John Wayne memorabilia and an original True Grit poster autographed by most of the cast members.

Established in 1985, Tammee and Dale Tuttle have owned True Grit for the last 18 years. She’s the 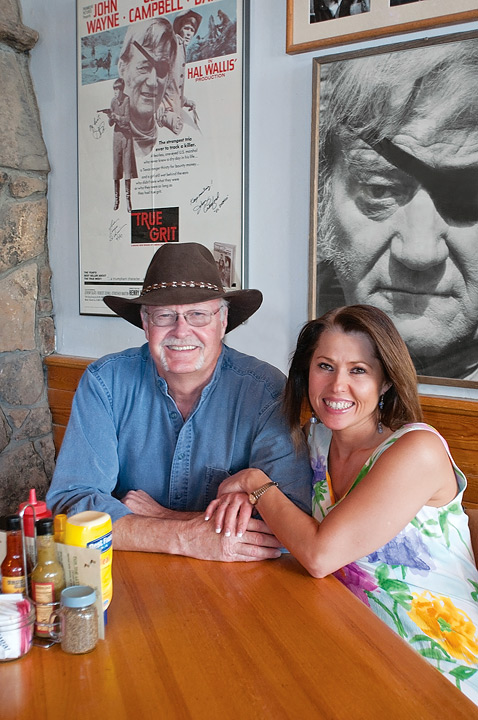 energetic firecracker running the show, but it was Dale who brought them to Ridgway. He first came out here in 1962 to train in the San Juans for mountaineering in Alaska and South America. “I always loved Ridgway and spent most of my life trying to figure out how I could live here,” Dale said. “Finally we just moved out and then the restaurant came up for sale, so we made an offer.”

Dale is big and tall, like the Duke, and pursued his own big adventures throughout life. Today, on their time away from the True Grit, he and Tammee still travel to Africa to lead wildlife photo safaris and climb peaks.

“What would John Wayne eat if he was here?” someone asked. “Ribeye and rye whiskey,” Dale replied.

At True Grit, the signature dish is the chicken fried steak, which arrived as big as the blade of a shovel. It’s a decadent delight, and the waitress told how some cowboys will come in and eat two of them at a sitting. It’s hard to imagine this possibility, but we bet John Wayne would have given it a try. 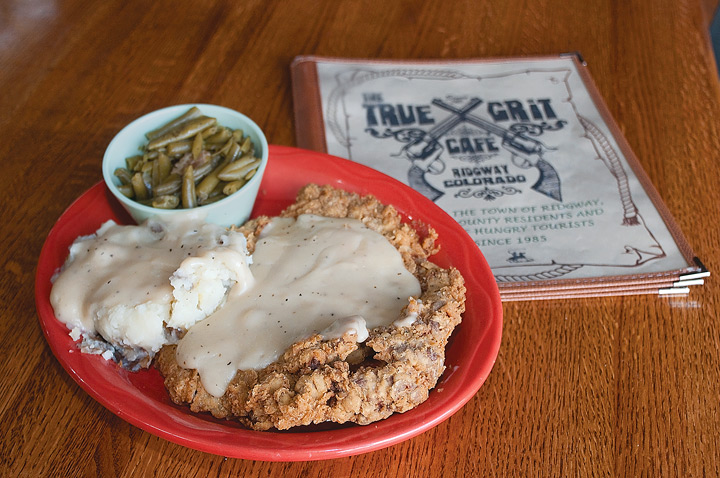 The star of the show at the True Grit Café is undoubtedly the chicken fried steak. Owner Tammee Tuttle said the restaurant served 5,300 chicken fried steaks in 2012, and while she hasn’t tallied up the total number from last year, it might have been even more popular then.

To make True Grit’s chicken fried steak, pour milk into a wide, shallow bowl. Mix salt, pepper and flour in another wide bowl. Dredge steak in flour mix, pressing down to flatten out steak. Dip steak into milk. Dredge steak in flour mix again, flattening out with the palm of your hand. Heat oil in deep frying pan on stovetop at medium-high. Fry in hot oil that covers top of steak. Cook about five minutes, flip steak, then cook another 5 minutes, until steak is golden brown. Place on paper towels for a few minutes to absorb excess oil. Top with white gravy and pair with your favorite sides.

To make gravy, melt shortening in saucepan over low heat. Blend in flour, salt and pepper. Cook until smooth and bubbly. Stir in milk. Heat to boiling on medium heat, stirring constantly. Stir and boil 1 minute. 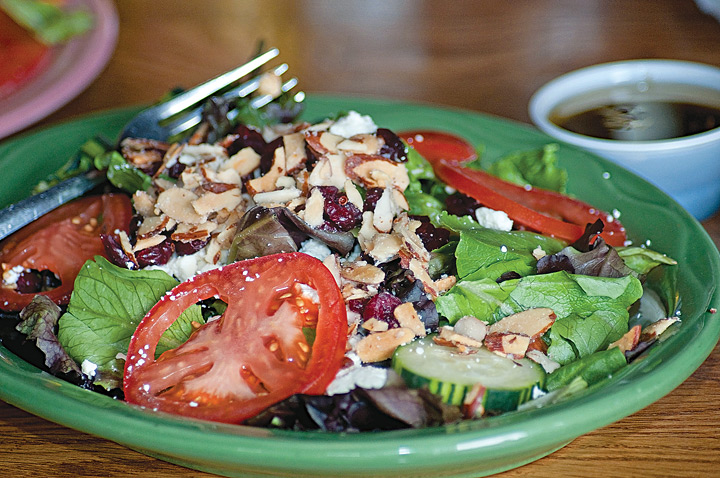 True Grit Cafe uses a secret ingredient on its home fries and in its salad dressings: Seasoning Dirt. Well, maybe it’s not exactly secret – you can buy True Grit Seasoning Dirt at the restaurant or at shop.truegritcafe.com – but the list of 11 ingredients that go into the mixture is proprietary. When the Tuttles took over True Grit nearly two decades ago, they inherited special herb combo and continued using it. The cranberry salad is a delightful combination of sweet and savory flavors, perfectly complemented by a homemade vinaigrette using Seasoning Dirt.

To make the salad, mix crumbled feta, cranberries and sliced almonds in a small bowl. Sprinkle mixture on top of a bed of mixed greens on dinner plate. Grill chicken breast or salmon fillet and place on top of salad. Serve with homemade balsamic vinaigrette. Slices of tomato and cucumber can be added, if desired.