Colorado has more than 50 mountain peaks above 14,000 feet. These 14 are the most loved, appreciated, revered and feared. 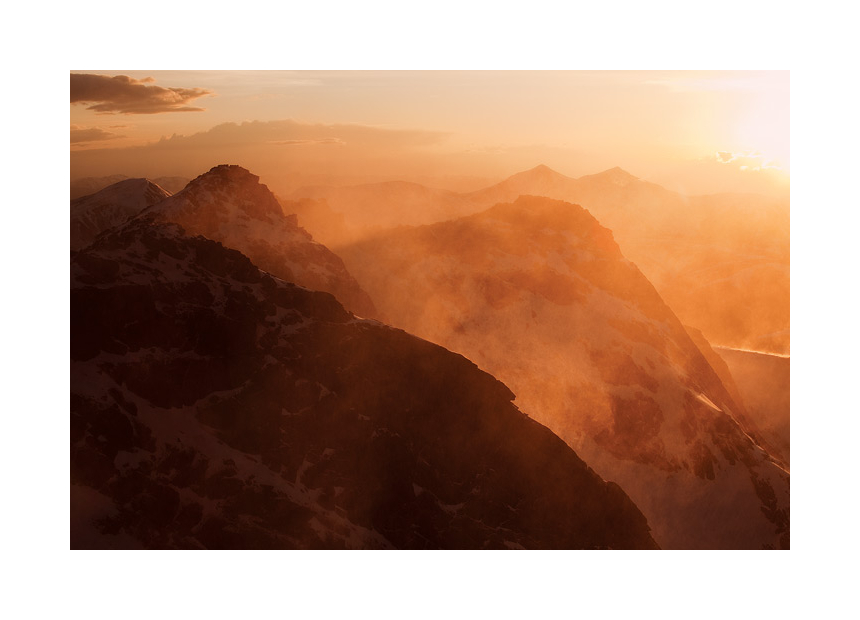 Colorado is famous for its 14ers, but there’s debate as to the exact number of 14ers the state has. The Colorado Mountain Club lists 54, but others cite 53, 55 or 59, depending on how you count certain subpeaks. Regardless of which total you use, these 14 peaks are some of the most magnificent 14ers in Colorado, with some of the most awe-inspiring views. From the top of undisputed 14er Mount Evans near Idaho Springs, you can see two other confirmed 14ers, Grays Peak and Torreys Peak.

AS THE EARTH rolled and heaved with colossal geologic shifts, the Rocky Mountains of Colorado slowly rose into shape. For the last few million years, they’ve looked basically the same as they do now. But, during those many millennia since, other elements radically changed – rivers shifted course, forests grew and died, dinosaurs walked the valleys and disappeared, and wildlife evolved. Then humans arrived.

We permeated the Rocky Mountains slowly, as Paleo-Indians hunting mammoth, as Native Americans forming tribes and establishing territory, as settlers occupying the same lands. In this last phase, a period almost infinitesimally thin compared to time before, the mountains changed from simple but significant geologic phenomena to objects of emotion. The Rocky Mountains of Colorado became an inspiration to some, an impediment to others, a crocodile spine on the horizon looming over early wagon trains headed west. Then, in the blink of Earth’s eye, Colorado was settled and the mountains took on more meanings as peaks to be climbed, conquered and named. The mountains settled into our psyches and became part of our culture.

Colorado’s mountains continue to inspire us, to challenge us, to awe us and simply make us happy. Even though there are hundreds of peaks in the state, we gravitate to the 54 highest summits over 14,000 feet.

Here are a few of the 14ers that we love.

You’ll never forget the drive into Crestone. The Sangre de Cristos absolutely loom over the San Luis Valley. It’s one of the most beautiful mountain vistas in Colorado. The Crestone Needle lies at the heart of this jumble of steep peaks – one of the state’s most coveted summits for climbing. The most famous route is the Ellingwood Arete, a class 5.7, grade III technical climb highlighted in the 1979 book Fifty Classic Climbs of North America. The real climb starts at the idyllic South Colony Lakes, which also is an excellent basecamp and fishing spot.

The highest point in San Miguel County, but significantly shorter than nearby Mount Wilson, Wilson Peak was named after A.D. Wilson, one of America’s best-known 1800s mountaineers and geographers. Wilson first came to the area with the U.S. government survey led by Ferdinand V. Hayden.

Often photographed in snow above golden bands of Aspen trees, stunning Wilson Peak has played a prominent role in Rocky Mountain advertising, its image used extensively by Coors Brewing Co. and Jeep in their television advertising campaigns. If any Colorado peak is a film star, this is it.

Yes, you can drive to the top of a 14er. From Idaho Springs, the 14-mile road to the summit of Mount Evans was completed in 1927 as a tourist attraction to compete with the Pikes Peak road. Today it’s known as the highest paved road in America. Mount Evans also garners attention as the closest 14er to Denver, so you’ll enjoy plenty of company on the summit in summer.

According to geologists, Mount Evans formed 1.7 billion years ago as granite pushed up through metamorphic rocks. The peak grew again twice – 300 million years ago and 65 million years ago. Today the peak is a massive weathered bulk so large it creates its own, often violent, weather systems that travel toward Denver and the eastern plains.

Giving Pikes Peak a run for its money in the 14er popularity contest, the Maroon Bells near Aspen are perhaps the most photographed mountains in Colorado. From Maroon Lake, a U-shaped valley frames the pyramid summits of Maroon and North Maroon Peaks perfectly. The view stuns people.

The climbing route up North Maroon Peak stuns people too. The route offers steep, loose, dangerous terrain, leading to the nickname the “Deadly Bells.” The Maroon Bells are Colorado’s deadliest mountains, including a streak of misfortune in 1965 that saw eight climbers die in one year. The peaks continue to average one climber death a year. Watch your step!

Pikes Peak and Colorado remain synonymous. The peak was named for Lieutenant Zebulon Montgomery Pike Jr. after he spotted and tried to climb the peak in 1806, while on an expedition to find the source of the Arkansas River. Turned back by snow, Pike deemed the mountain “unclimbable.” On July 14, 1820, Dr. Edwin James and two members of Major Stephen Long’s expedition reached the summit without incident. They’re known as the first white men to summit a 14er in Colorado.

Pikes Peak remains Colorado’s best-known peak. If you don’t want to hike up it, or drive up it on the road, ride the Pikes Peak Cog Railway. Starting in Manitou Springs, the railway climbs 8.9 miles of track to the summit, where you can drink a cup of coffee in the cafe.

Located in the heart of the wilderness near Ouray, Mount Sneffels is the prominent peak in “America’s Switzerland.” Despite dangerous igneous rock, four climbers from the Hayden Survey summited Sept. 10, 1874.

It’s debated, but most believe the climbers named it after Snæfell, the peak rising above the great hole in the Earth in Jules Verne’s 1864 novel Journey to the Center of the Earth. Following generations mispronounced the name until it became its current version, Sneffels.

Can’t decide which 14er to climb first? Tackle the East Ridge of Quandary Peak close to Breckenridge for a ridgeline walk up. However, don’t underestimate the effort; this is the highest peak in the Tenmile Range. It’s also tied for 12th, 13th and 14th highest peak in Colorado with Castle Peak and Mount Evans, all 14,265 feet.

In winter, Quandary is popular with climbers and skiers who ski down Quandary’s broad snowfields and climb Quandary Couloir II, a Class IV mixed snow and ice route. Make it your “Mountain of Firsts” – first 14er in summer, first snow/ice 14er route in winter and first ski descent.

Just south of Elbert, Mount Harvard is one of the Collegiate Peaks, 14ers that include Columbia, Princeton, Yale and Oxford. In 1869, a surveying party led by Professor Josiah D. Whitney started naming the peaks after famous universities, beginning with Harvard for students in his survey group, and Yale, his alma mater. Other geographers followed suit. Mount Harvard’s summit is the third tallest point in Colorado. In the 1960s, a group of Harvard men sought to make it the tallest by erecting a 14-foot metal pole at the very top of Mount Harvard to eclipse Mount Elbert, which is 13 feet taller. But geographers never recognized the peak’s pole-adjusted height, and the pole disappeared in the 1980s.

From the outskirts of Leadville, the highest town in the United States at 10,200 feet, two peaks completely fill the western horizon – Mount Massive (14,421 feet) and Mount Elbert, the highest peak in the entire 1,800 mile length of the Rocky Mountains. From the heights of Leadville, however, they don’t seem so high – what really strikes one is their impressive bulk.

Mount Elbert is a gentle giant, an unassuming peak in the long line of 14ers that stretch down the Sawatch Range in the Upper Arkansas River Valley. Besides the altitude, it’s not difficult to summit, and within reason, the whole healthy family can climb the highest peak in Colorado.

Like a sentinel over Colorado’s Front Range, Longs Peak rises 7,000 feet over the town of Estes Park and is the only 14er in Rocky Mountain National Park. Long before it became Longs Peak, Arapaho Indians called it and nearby Mount Meeker (13,911 feet) “Nesotaieux,” or “The Two Guides.” Arapahos say a native climbed the peak long ago and trapped eagles on the summit.

The east face of Longs Peak is known as the “Diamond,” an imposing 900-foot cliff face at 13,000 feet. “The Honeymoon is Over” remains the hardest route on the Diamond, established by Eric Doub in 1996, and not free-climbed until 2001 by Tommy Caldwell, both Colorado locals.

As gold miners descended upon the area around 1859, rumors went out about a mountain with a huge cross on the summit. Many claimed to have seen it, but its exact location remained a mystery until 1873, when the Hayden Survey set out to find and photograph the peak. After climbing nearby Notch Mountain, pioneer photographer William H. Jackson made his famous photograph of the cross on the northeast face of Holy Cross, near present day Red Cliff.

Before long, devotees came to pray at the base of the cross, which is 1,400 feet high and 750 feet across, made from a deep gully and horizontal shelf that fill with snow. As it melts, the water runs down near the Bowl of Tears, a brilliant blue lake below.

Listen to talk about Capitol Peak and you won’t hear about the beautiful lakes below the summit, or that it rises 7,000 feet over nearby Redstone, or climbers gushing over the beauty of the nearby Maroon Bells above Aspen.

You’ll only hear whisperings of the infamous “Knife Edge,” the crux of the easiest route up the peak, the northeast ridge. This is also the only nontechnical route to the summit. The Knife Edge inspires dread in acrophobic peak baggers because it is steep, exposed and it drops off hundreds of feet on both sides. Just scoot along the Knife Edge – most people do!

Barely squeaking over the magic 14er altitude near Lake City, Sunshine Peak is often mentioned in the same breath as Redcloud Peak (14,037 feet) – they’re connected by a long ridgeline that drops little in altitude.

Climbers summited both in 1874, and both underwent the typical naming and renaming process of Colorado 14ers. Sunshine Peak has been known as Station 12, Niagara Peak and Sherman Peak. Finally, in 1904 the U.S. Geological Survey officially named it Sunshine Peak.

Is it a 14er or not? The debate rages about whether Conundrum Peak is just a subpeak of Castle Peak (14,265 feet). Apparently, to be an official mountain, a summit must rise at least 300 vertical feet higher than the saddle connecting the neighboring peak. By this reckoning, there are several more 14,000-foot summits in Colorado that are not considered official 14ers. So Conundrum Peak is not an official 14er, but the good news is that you can summit both these peaks from Aspen in a day.

But this conundrum wasn’t the original conundrum. Miners found traces of gold in the creek coming down the mountain, but could never find the source. They did, however, find some of Colorado’s only remaining wilderness hot springs. Soak, look up and go hunt for gold.