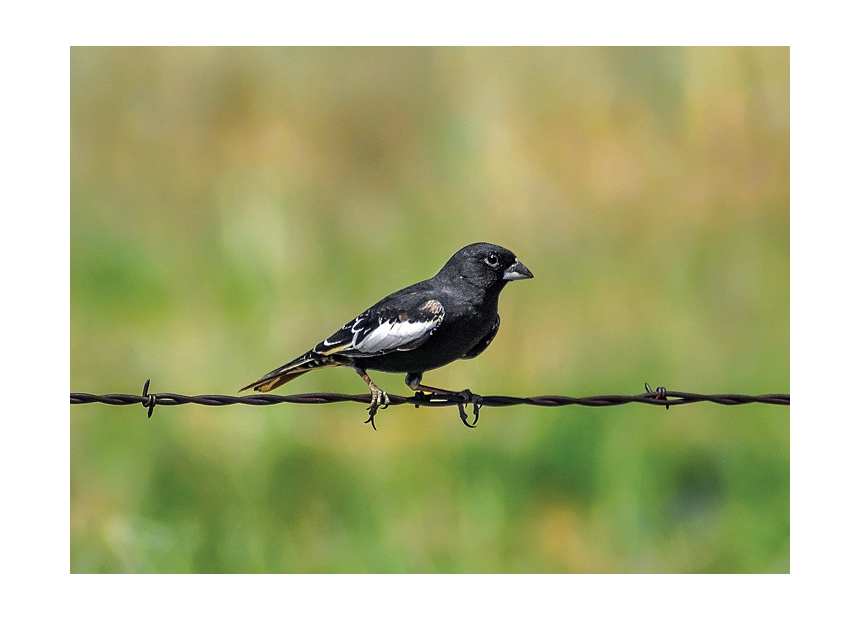 Want more entertaining Colorado state symbol stories and photos? Find the lark bunting and more than a dozen other fascinating and surprising Colorado symbols in the current July/August 2018 issue of Colorado Life Magazine. Buy it on newsstands or subscribe now.

The debate over Colorado’s state bird was shockingly rancorous – at least by the normally genteel standards of selecting state symbols. Two clear favorites vied for the title in 1931: the western meadowlark and the mountain bluebird. There was also chatter about something called a lark bunting, but most people dismissed it, as most had never heard of it.

Coloradans wanted to pick a charismatic bird that lived year-round in all parts of Colorado, and they didn’t want to pick one that was already the state bird somewhere else. The meadowlark, the beloved prairie songster, had the advantage of representing the state both east and west of the mountains. However, the meadowlark’s widespread popularity worked against it, as it was already the state bird in three other states. The mountain bluebird was the frontrunner thanks to male’s cerulean color matching Colorado’s blue sky. The bluebird had the powerful backing of the Colorado Mountain Club and other groups, but it, too, had already been taken by other states.

That left the lark bunting, a confusingly named bird that is neither a lark nor a bunting but a type of large sparrow. Working against its candidacy as a statewide symbol was the fact that it is found only on the Eastern Plains, and then only during its breeding season. The lark bunting did have one major advantage: No other state had claimed it or even expressed interest in it. Still, for the relatively few people familiar with it, the lark bunting dazzled. During spring courtship, male birds rocket 50 feet skyward, then spiral down as they pour out a pretty song, and their black-and-white summer plumage is undeniably striking.

The contest came down to the three birds’ champions. Boulder naturalist Charles Bowman Hutchins backed the bluebird. Dubbed the “Bird Man,” Hutchins wowed audiences nationwide with his uncanny bird-call imitations, which he whistled or sang while sketching pastel pictures of the appropriate bird; his wife accompanied him on piano or harp.

Katherine L. Craig, the state superintendent of education, did battle on behalf of the meadowlark. Colorado’s schoolchildren studied birds according to a curriculum she designed, and her lesson plan had the students cast ballots for their favorite bird. Unsurprisingly, the students ended up voting for Craig’s favorite bird, the meadowlark. The lark bunting didn’t even get a spot on the ballot.

Roy Langdon, a Fort Collins high school teacher and Colorado Audubon Society president, was a force of nature advocating for the lark bunting. "Our troubadour of the Plains is gentle of manner and pleasingly sociable among his fellows,” Langdon wrote in his magnum opus, The Case for the Lark Bunting. With almost religious fervor, he described the lark bunting’s song as “the glory that was, and everlasting joy that is, living in Colorado.”

The showdown was set for the 1931 legislative session. Unexpectedly, the bluebird – the people’s choice – faded fast. Hutchins briefly argued on behalf of the bluebird, stated his opposition to the lark bunting, then departed, whistling a few bars of the bluebird’s song for the lawmakers before he left.

It was then Craig’s meadowlark versus Langdon’s lark bunting. Craig arrived at the Capitol brandishing her students’ ballots, which had been the traditional method for deciding state symbols. She had promised her students the meadowlark, and she wasn’t about to let the collective voice of 111,914 children be silenced.

But Langdon was shrewd. On the climactic day, he packed the legislative galleries with 121 Fort Collins High School seniors to cheer on his bird. He set up a portrait of the lark bunting on the assembly floor and delivered a dramatic, 15-minute speech. “Give us the only bird that meets all the qualifications for the effective role of state bird,” he demanded in closing. “Give us the lark bunting!”

The longshot had carried the day – the lark bunting won in a unanimous vote.

Coloradans accepted their new state bird with more bemusement than enthusiasm. For decades, the lark bunting operated just under the radar, not even listed as Colorado’s state bird in some birding books. Perhaps the ultimate ignominy was when a state publication made the bird’s color blue instead of black. It was almost as if the bluebird was trying to sneak back in – and that almost happened in 1973: Carbondale state Rep. Mike Strang introduced a bill to ditch the lark bunting and bring in the bluebird. Strang decried the lark bunting’s “furtive, secretive air,” while praising the bluebird’s “open, honest, trusting look.” He got a lot of press, but his attempted bird coup failed.

The lark bunting has now reigned for nearly 90 years, yet Coloradans remain largely ambivalent about their feathered mascot. Most have still never seen a lark bunting – but that is easy to remedy. Perhaps the best place in Colorado to see lark buntings in spring and summer is Pawnee National Grasslands. After this long as Colorado’s bird, it’s probably time to show the lark bunting some love.